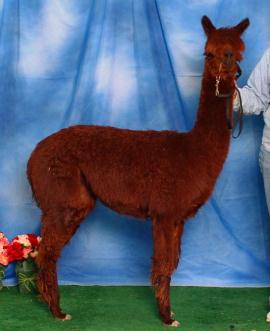 Here is the answer! Diane Beaver at Alpaca Ventures described Claytonite as the best male offspring produced on her farm by Cantano of Peru. Claytonite is now owned by Marie Brown of New Horizons Suri Alpacas (Patti's mom) and is standing stud at the Wild Rose Suri Ranch. He carries the same rare color as his sire, that deep, dark maroon that glistens with a purple tinge of color. Claytonite represents breeding diversity and the ability to combine the best genetics for color and fleece. He is the perfect choice for those looking for top dark maroon males to breed to Macgyver daughters and granddaughters.

Claytonite has fantastic coverage and density. His fleece regrowth has been exceptional and has come back uniformly curled and locked across his body. (See photo) His beautiful color is consistent across his body with high luster. Claytonite's head is very typey with a shorter nose, and beautiful dense locking all over his face, topknot, cheeks, and beard. This stunning male offers exciting possibilities with his rare color and bloodlines. See his beautiful maroon crias for sale!

Contact Patti Anderson at 410-734-7084 (farm) or 443-740-4240 (mobile) for more information on doing mobile breedings to this promising purple-maroon top suri male.
Dam: Topaz Moon
| 31091404 | Light Fawn |
Full Peruvian - A light fawn female, Topaz Moon, is a full Peruvian sired by Durazno's Dynasty (a Uribe son). Her dam is Autumn Glory Rose, a Munacoy daughter. Topaz Moon started her breeding career early and was never shown. Her McGyver son, Polnaya Luna, won a fourth at MAPACA 2007 as a yearling. Her newest cria arrived in April, a beautiful dark/medium brown girl. Watch for her in the MABA Alpaca Celebration in the fall. 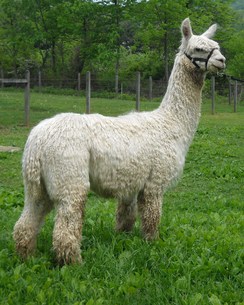 Camelot is a beautiful representation of the Accoyo Crown Royal line. In his very first show, the 2007 Futurity, he was the youngest at just 7 months to place in an extremely tough class of 12 white juveniles. Just 2 weeks later, Camelot was awarded 1st Place at the Ohio Buckeye Show in an equally large and super competitive class! Camelot went on to win 1st Place at AOBA Nationals! Camelot's extreme density and luster placed him at the top of his class of 13 at AOBA. After AOBA Nationals, Ca ...
More Details
Sold
Ask a question
Details
Certificate Histogram
Anastasiya's wonderful coloring comes from her sire, Cantano's Peruvian Claytonite. She has great conformation with good straight front legs and a strong top line. Her second fleece came in as nice as her first one with almost the same micron, standard deviation, and co-efficient of variation. She's an easy keeper. Never puts up a fuss for herd health. She has plenty of milk.


Come see for yourself and imagine her in your pasture! 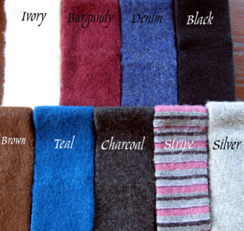 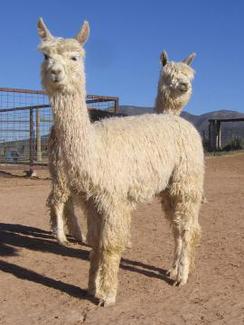